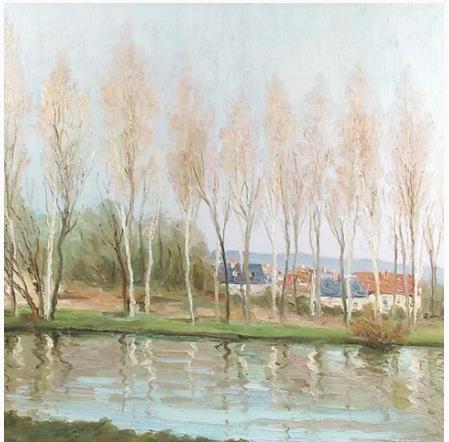 Detail of a painting by Marcel Dyf entered into our fine art auction on July 5th.
Known for his Impressionistic style, Dyf originally took inspiration from the Old Masters, particularly Rembrandt, Vermeer and Tiepolo. His landscapes and still life are infused with light and a rich yet elegant palette.

Marcel Dyf was born in Paris in 1899. Dyf painted from a young age but only committed to it as his craft in 1922, at which time he moved to Arles to establish a studio. He later opened a second studio in Cannes and went on to study at the Carnegie Institute in Pittsburgh, Pennsylvania.

In 1935 Dyf moved to Paris, taking over the studio of the artist Maximilian Luce. His time there was cut short by the outbreak of World War II during which time Dyf joined the French Resistance. In his later years Dyf travelled to Morocco, Venice, the United States, Holland and England finding inspiration.

Through his London-based gallery Frost and Reed, Dyf exhibited in London, New York, Dallas, San Francisco and other major cities worldwide. His work is to be found in museum collections, as well as distinguished private collections.